Peter is the author of several books, including: 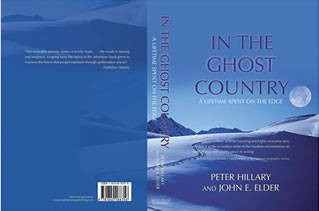 A memoir of extraordinary depth and brutal honesty, In the Ghost Country is the story of Peter Hillary's journey into a world of sensory deprivation. A place where thoughts and memories are projected on to the blank slate of the Antarctic snows—so real that the ghosts of lost friends and loved ones walked with Hillary in the white maelstrom.

During the three-month-long expedition, Hillary and his two companions skied 900 miles across the icy wastes of Antarctica to the South Pole. Early on, the relationships in the little tent disintegrated to acrimony and distrust in scenes reminiscent of Jean Paul Sartre's 'Hell is other people.'

This is the story of that journey: a chronicle of profound isolation, of great stamina and skill, of the mental and emotional toll exacted by travel in extreme environments. It is also a meditation on a lifetime spent on the edge, a memory book of more than thirty expeditions in the Himalayas, the Andes, the Arctic and the Antarctic. It tells of triumphant adventures—travelling with his father, Sir Edmund Hillary, and Neil Armstrong to the North Pole, climbing Mt Everest twice—and bitter tragedies, like the shattering K2 climb where Peter was the only one of eight climbers (including Alison Hargreaves) to survive, and the loss of his mother and sister in a plane crash in the Himalayas.

In the Ghost Country is a radical departure from the adventure genre, a literate and evocative tribute to the crafts of polar travel and mountaineering, a Shackleton-like tale of endurance, and a compelling contemplation on a life of adventure and accomplishment.

A selection of reviews and comments at the time of publication:

“What an extraordinary book! Compelling and refreshingly honest. A beautifully written, at times haunting and highly evocative story of what it is like to endure some of the harshest environments on earth. A truly remarkable piece of writing.”

“Peter Hillary's harrowing account of his attempt with two companions to complete Captain Robert Falcon Scott's doomed journey to the South Pole makes for powerful reading. A masterful story of an expedition's precipitous collapse and a study of a life lived on the brink, this is a vivid tale of physical endurance, heartbreaking loneliness, and ultimately the triumph of a man over the cruelty of the Antarctic wasteland and the ghosts of his own past.”

“The true journey in exploration is the emotional and cerebral struggle one faces on epic adventures. In the Ghost Country clearly articulates the consuming internal conflicts and team dynamics every expedition experiences. An outstanding account of adventure, courage and endurance.”

“In 1998, explorer-adventurer Hillary (son of Sir Edmund) set off on skis with two ill-chosen companions to retrace the South Pole route that killed Robert Falcon Scott in 1912. Like Scott, Hillary and company hit horrendous barriers. The cold chewed up equipment and ravaged fingers and toes. Storms pinned the team in its tiny, fetid tent. They slowly starved, as the brutal march burned more calories than their bodies could absorb, and Hillary nearly ruptured himself dragging his 400-pound sled of supplies. But the worst torture was mental. The unending white landscape gave everyone a bad case of expeditionary madness, and Hillary got the brunt of it. His teammates began blaming him for their setbacks, and soon excluded him from the smallest social interactions. Alone in a frigid sensory-deprivation tank, Hillary began to hallucinate. Dead friends and relatives tramped with him through imagined landscapes and, with him, revisited the adventures and tragedies of his past. The miserable journey makes a terrific book, as Hillary's visions frame frequent flashbacks to other expeditions and to his New Zealand childhood. The main narrative, written in the third person by journalist Elder, is larded throughout with first-person commentary by Hillary, who is a fine, frank writer. This unusual structure solves the problem of the toneless voice that "as told to" accounts can have, while retaining a sense of intimacy and authenticity. The result is moving and insightful, scraping away the hubris of the adventure-book genre to examine the forces that propel explorers through godforsaken places.”

“I'm the publisher of the book in Australia and really delighted that we have such a superb title on our list—it's an extraordinary story, and wonderfully told. Congratulations.”

“A mind-bending yet somberly reflective chronicle of mountaineer Hillary's otherworldly journey with two mates tracing Scott's route to the South Pole. The narrative is structured as a duet, with Hillary's personal material in bold face, while Australian journalist Elder fleshes out the story in long segments of plain type. His coauthor's distinctively sharp prose contrasts with Hillary's digressive account, which often has the feel of fireside remembrances, though certainly not soothing ones. Much of the text covers his hellacious trip with Eric Philips and Jon Muir, on foot and via kite-pulled sledge, from the Ross Ice Shelf to the South Pole. The trio confronted all the "cruel quirks and torments" of travel at the ends of the earth, including personal conflicts and "the jaded fugue of living under cloud." Hillary vividly evokes that "monochrome of misery . . . strong winds, drifting snow, a fog of spindrift, intensely cold conditions, no sky, no horizon, white on white on violent white." When in extremis, which was much of the time, the mountaineer was also troubled by the voices and the ghosts of his deceased mother and lost climbing companions. ("The late afternoon was always popular with the dead friends," he jests grimly.) A psychologist later explains, not altogether convincingly, that he was “borderline psychotic . . . it's the visual and sensory deprivation of polar travel . . . that especially plays hell with the mind.” The neatly woven narrative tapestry also contains reminiscences about times and travels with the author's father, New Zealand beekeeper and Everest conqueror Sir Edmund Hillary, as well as various adventures and misadventures in the high hills. Despite the physical and emotional extremities he's experienced, Hillary avers, “I'm drawn to the simplicity of the pilgrim's life, and the soaring emotions that go with it.” More cautionary even than Apsley Cherry-Garrard's The Worst Journey of the World or Jon Krakauer's Into Thin Air.”